I have decided upon a Halloween release date for my self-published novel STAR-CROSSED: THE CONFOUNDING CALAMITIES OF BYRON THE CAD AND MARIETTA THE ZOMBIE. I mean, Halloween = Zombies and Zombies = Witty Dialogue and Witty Dialogue = MY NOVEL, so it all checks out.

I’m going to start out on the Amazon Kindle and then move to everywhere else in the market. Print books will come soon, too.

Below is a little re-vamped (ha! see what I really didn’t do there but totally could if I wanted?) cover for the Kindle version! It’s slightly greener, and as we all know, GREEN = ZOMBIES (and maybe the Hulk), so that checks out, too. 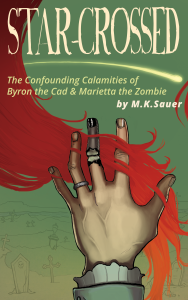 I’m really only expecting to sell about fifty copies (and those all coming from my friends, family, and those I have threatened with bodily harm) but anything could happen. I’ve had to really re-assess what it means to me to be a writer and what I want from my life as a novelist. Is it more important to be seen (i.e. get published no matter what) or is it more important to find an agent and go the traditional route and continue to shop a somewhat unmarketable novel around until, years later, it may or may not ever be published?

I’ve had three different publishing houses request this manuscript and each one has given me the feedback: “Yes, we like it! It’s really well written with a unique world and great dialogue, but:

Which pretty much sums up all of the criticism I’ve received about my short stories too, so I’m now of the understanding that STAR-CROSSED is just too weird, too niche, and too genre-bending to find an agent or a house any time within the next decade.

So it came down to deciding that I’m more interested in having other people read my work, regardless of who publishes it. The stigma is slowly going away for self-published authors and I have edited/re-written/fine-tuned the ever-loving shit out of this thing, so it’s time to give it one last spit-shine and send it into the world, like a turtle leaving its eggs to hatch and find the ocean by themselves. (That metaphor kinda fell apart, but you get the gist.)

HALLOWEEN. YOU. ME. A STEAMPUNK ZOMBIE NOVEL.

I think the best part is going to be talking to my mom after she (unsuccessfully) tries to read my novel.

“It was…interesting, dear. Good job. You finally did it. Why do they have to eat other people, again?”

First: here’s a picture of my badge from AnomalyCon! 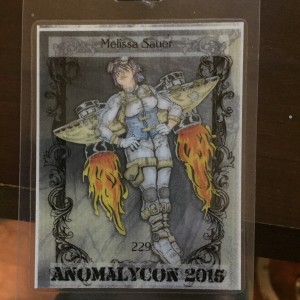 Even has my name on it and everything.

I know. It seems like a few blog posts ago (err…just one, actually) that I was debating whether or not to self-publish and then, BLAM-O, I’m self-publishing. So, let’s recap as to my steps, shall we?

I like the freedom that comes with self-publishing, though I am still very worried about not being seen as a legitimate writer or a writer of any worth–given that there’s so much bunk out there in the self-published world. I’m hoping that this will a) get my name out there and b) allow me to hone my craft in such as way as fits my schedule. The end goal is to write and then publish a novel every 2-3 years and pretty soon I’ll have a large enough portfolio that I’ll either get noticed by a publishing house or I won’t even have to worry about such things anymore.

I’ve decided to go through Amazon Kindle Direct Publishing for the e-books and IngramSpark for print books. From what I understand, KDP has an option where you publish through them for a certain period of time (90 days or something?) and then you’re free to publish on all other platforms, including Kobo, Nook, Smashwords, and Bookbaby.

IngramSpark for the print books because it seems like a really quality company that’ll produce a good product. (Other options are Lightning Source and Lulu.) Here’s an interesting article comparing IngramSpark and Lightning Source from a few years ago that helped me with my decision.

I’m also toying around with giving people ARCs (advanced reader copies) on sites like Goodreads and the like, but that might be a bit much for my busy work schedule as of now.

Also, I’m going to have to get some ISBNs so that my book will have the same ISBN number, or at least reference the same number, so I can get tracking and sales info across all formats. This part I’m a wee bit wobbly on, so my usual inclination is just to jump right in and see what happens.

As it is right now, I’m waiting on my editors to get back my second draft to me and then enact their changes. I’m thinking I might send out copies to close friends to read for last minute errors and then KABOOM, it’ll be a little published baby.

This past weekend I was at a booth with my good friend Stevie (she steams art online at Twitch) selling her fantastic prints and commissions of AnomalyCon goers!

AnomalyCon is a steampunk (ohemgee, amirite?) and sci-fi convention, so, of course, we fit right in.

If you’re here because you got one of my business cards, HELLO.

Here are a few updates about my upcoming novel, Star-Crossed:

KEEP ON CHECKING HERE FOR UPDATES AND PURCHASING INFO.

I love all of you.

Getting to Know Me