Wesley is just so much cuter. And less inclined to concussions from being head-bonked, though, surprisingly, more susceptible to gunshot wounds, slit throats, and eventual death. Also, he’s a rogue demon hunter.

So, as part of my non-New-Year’s-resolution — the learnin’ bit — I’ve decided to go to my local library, ask for the British librarian to check if I’m the Chosen One and get kicked out and get books on anything vaguely related to my non-vampire novel. This includes, but is not limited to: dreams, memory, death, Jungian archetypes, and motorcycle maintenance.

Much to my surprise, a vague perusal of the library gave me this: On Dreams and Death, a book about Jungian interpretations of death dreams with an Egyptian mythology chaser. Ha! Perfect! Take that, Internet! Good ol’ fashioned research once again proves to be the victor, playing the Germans in this re-enactment of WWII, Risk-style.

Hey. Get your manky paws off of my little plastic battalions, huh? I’m trying to symbolically show the reasons for the brutality of 20th century skirmishes by comparing it to the effects of the Industrial Revolution and the penalties of compartmentalization on the human psyche. Oh, that’s not how we play this game? God, I just thought it was so boring, that modernization and Jungian archetypes must somehow figure in.*

Sometimes I feel as though I’m growing stupid, so I have to learn things in order to combat this. This sentiment, coupled with years of indoctrination at the hands of IB/AP/Honors schooling, means that I’ve started taking notes on this book. Notes. Cornell style for no reason other than the fact that I want to pretend I’m still in school so that my boring life is less pathetic. And because I don’t want that nifty callus on my right middle finger to go away.

So, what have I learned? A little bit about Egyptian death ceremonies, the fact that people dream really weird shit right before they die and that the pun Forever Jung is still just as hilarious as it was to me before this little adventure.

*While playing the game of Life I took the little plastic men and women and made a four-car pile up with many, many victims. Look! Here’s a picture! 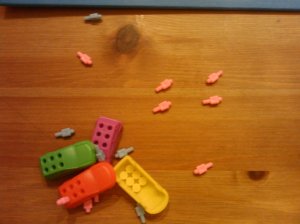 *No real Life figurines were harmed in the making of this production. But they were scarred mentally.

Imagine the poor little children of these plastic people, the blue-and-pink strewn body parts, the polymer intestines! Oh, the horror! The humanity!
0 CommentsLeave a comment

Getting to Know Me